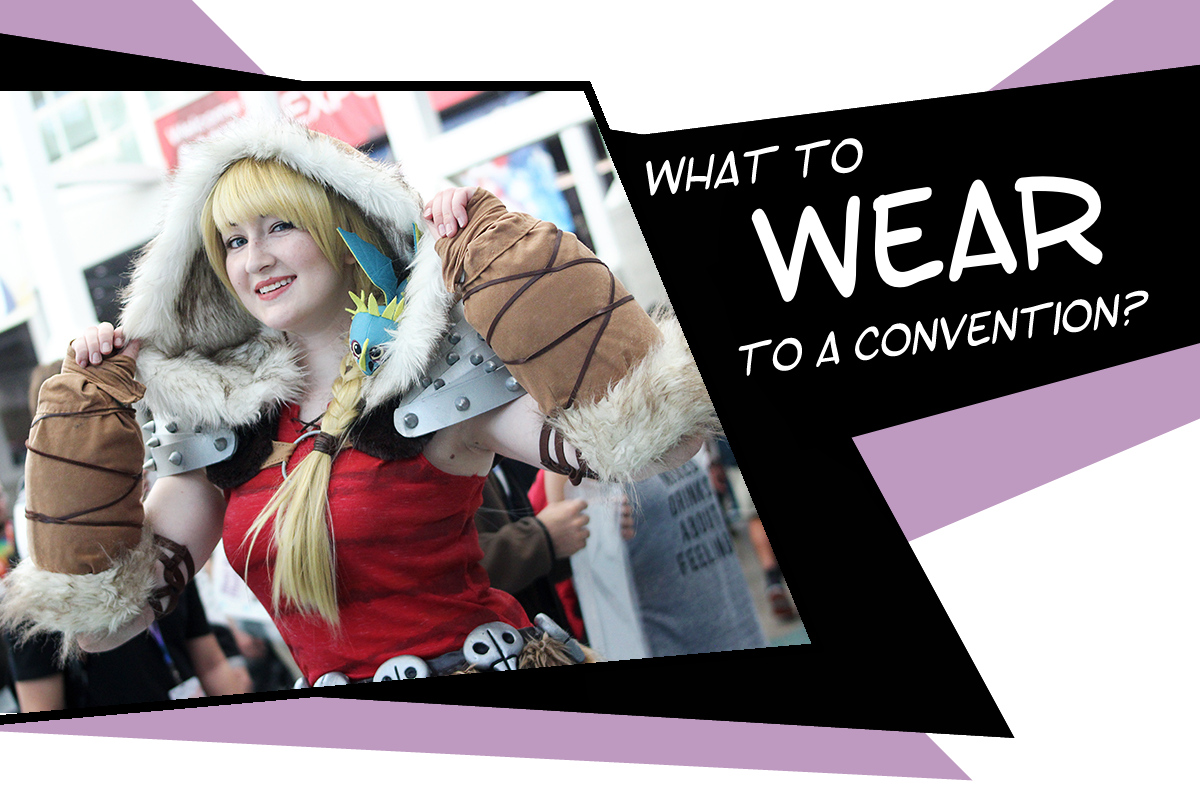 If you’ve never been to an anime convention before, I’m sure you’re excitedly wondering what to wear while you get ready for the event. Does everybody cosplay, or is it okay to go in normal clothes? The good news is, you can wear pretty much anything to an anime convention, no matter how normal or out of the ordinary, and no one even blinks.

Generally, it’s best to wear comfortable clothing to anime conventions. However, conventions are also opportunities to wear cosplay costumes or outfits that might look ‘weird’ if you wear them on an everyday basis (such as lolita or steampunk outfits).

It’s usually a good idea to pack at least one comfortable outfit with you so you can change into it when you need to. But anime conventions are also a great time to experiment with different fashions that intrigue you.

The smartest way to dress when you go to an anime convention for the first time is to wear something casual and comfortable. Anime conventions and comic cons are not formal affairs. Most people attending will be wearing jeans and a T-shirt. Something easy that you can step into and feel comfortable with during a long day with a lot of walking.

Don’t forget comfortable footwear. You’re going to be doing a lot of walking around at any convention, so this is not the time to try to break in a new pair of shoes. If you’re cosplaying and want to wear a nice-but-uncomfortable pair of shoes with your costume, be sure to bring a pair of flats to change into when your feet inevitably start to hurt.

Put on your geeky T-shirt

Anime and comic conventions are the best places to break out your favorite nerdy T-shirts. You’ll fit in completely with a shirt referencing anything from an obscure anime to a widely popular superhero movie. You’re likely to get fans of the same series complimenting the T-shirt, and may even find friends based on the common interest.

Don’t have a geeky T-shirt? At most conventions, you’ll easily be able to find a bunch of designs for different anime, movies, games, or other comic and anime-related topics. You can easily purchase a shirt and change into it at the convention or wear it the next day.

If you ever wanted to wear a costume of your favorite character outside of Halloween, this is the time to do it. Cosplay is a whole lot of fun and you’re bound to see a lot of it at any convention you go to. Some people will purchase their costumes while others will make them from scratch. You can be as creative as you want, but don’t feel pressure to create a full costume if you’ve never sewn anything before.

Cosplay is an excellent way to celebrate your favorite characters and meet people who share the same interests. You can find other cosplayers from the same series, get your picture taken, and have a good time exploring and role-playing while you’re cosplaying. A convention is the one place where you will actually fit into the crowd when you cosplay.

Dress for the weather

Whether you’re cosplaying or not, it’s best to keep the weather in mind. Most conventions take place during the summer months, so you want to avoid dressing in anything that’s going to cause you to overheat. If you’re going to a winter convention, don’t forget that it’s cold outside and you should probably wear a coat or a jacket.

I always advise people to follow the same rules even if you’re cosplaying. Plan out your costumes based on the expected weather so you don’t end up wearing a coat in the middle of summer and a shirtless costume in the middle of winter. I always keep a list of the costumes I want to make and plan out the order I make them based on the weather of upcoming conventions.

A Kigurumi is basically warm onesie pajamas for adults that are made to look like a cute anime or mascot character, such as Pikachu or Totoro. These are usually made of some kind of really soft fleece material. They may be a bit warm for summer conventions, but Kigus are great for a casual day at the convention when you want to dress up but don’t want to put any effort into it.

Anime and comic conventions are also great places to wear fashion and outfits that might be considered abnormal in normal society. Because of all the cosplayers wearing anything from realistic renaissance costumes to futuristic space-age cosplays, there are already a whole lot of different clothing styles present at most conventions. If you want to wear your frilly lolita dress or the steampunk outfit you put together, you’ll fit right in at an anime convention.

You can play with whatever fashion trends you’re interested in and not feel like you’ll stand out. I’ve seen people attend conventions in lolita fashion, steampunk, punk or goth clothing, rave gear, and just about anything you can think of. Don’t be afraid to go as over-the-top as you want to with your clothing style, since anime conventions are the perfect places to try out new fashions.

Every convention you go to is going to have a dress code. Most of the rules will be aimed toward cosplayers and people dressing in somewhat outlandish costumes just to make sure everyone stays decent, but it’s a good idea to check them out before deciding on your convention outfit.

Generally, these rules are just there to make sure everyone remains decent during the convention and no dangerous props are carried around. If you’re attending in casual clothes or are, by common sense standards, fully dressed, then you’ll be fine.

Sometimes making friends is difficult. Getting up the courage to talk to a stranger is something out of a nightmare for many of us shy and awkward people. But the beauty of anime conventions is that...

Continue Reading
link to How Long Do Anime Conventions Last?

If you’re getting ready to head to your first anime or comic convention, you might be anxiously searching the internet for all the answers to your questions. Everything from what stuff to do at...