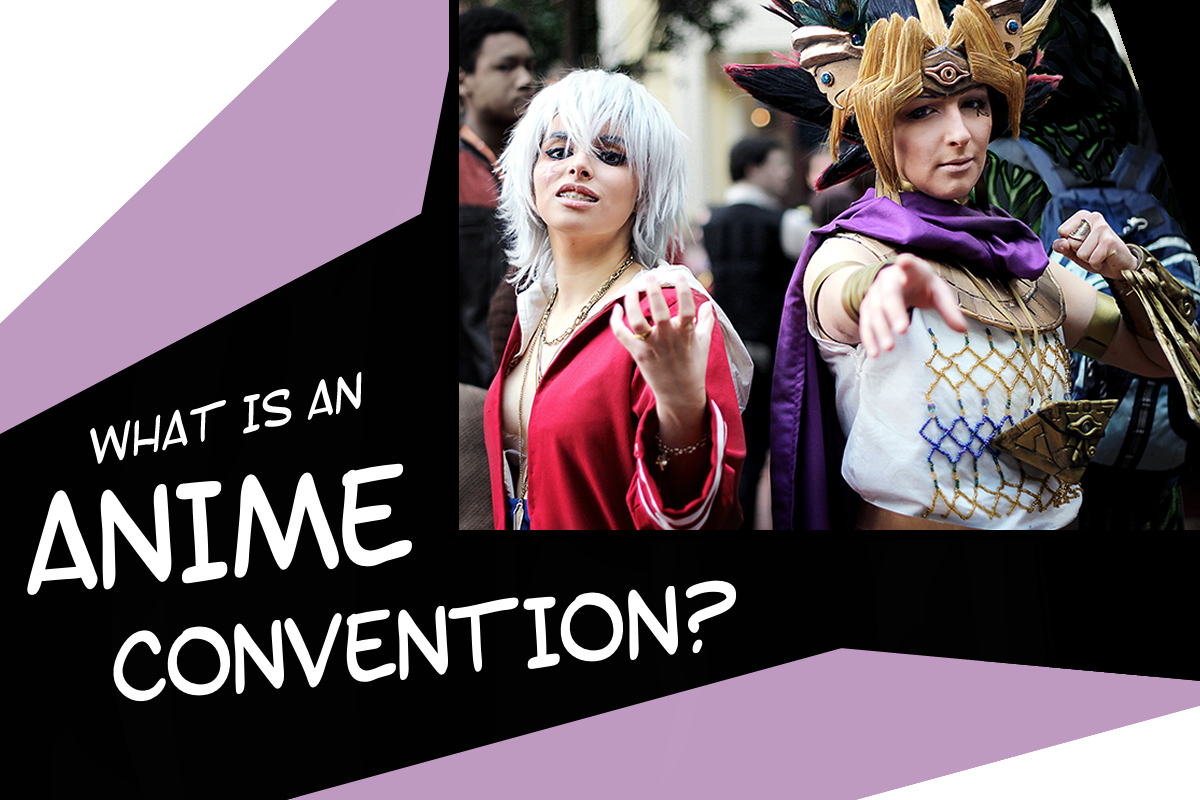 In recent decades, anime has become a worldwide industry. While the popularity of Japanese pop culture in America may have reached its peak in the mid-2010s, it still remains wildly popular. Anime conventions still attract thousands of fans every year to celebrate the stories, characters, and games that we find so appealing.

An anime convention is an event put on to celebrate Japanese animation and related pop culture (anime, manga, and games). Often, these are multi-day events with panels, workshops, anime screenings, and cosplay contests, but there are also smaller single-day events.

The scope of these events has broadened to include cultural and educational events, live programming, and autograph opportunities for voice actors and popular people within the community. However, Many fans will go to anime conventions not for the programming, but for the social atmosphere of being around other people who share their interests and passion for traditionally geeky media.

What is an anime convention?

The first known anime convention was Comiket, held in Japan in 1975. It started as a mass gathering where fans could buy and sell manga and doujinshi (fan-published comic books). It has since evolved to include other areas of fan culture, including cosplay and anime premiere screenings. Comiket is still considered the largest anime convention in the world and attracts hundreds of thousands of fans every year.

Anime conventions spread to America in the ’80s and ’90s. Originally, these anime conventions were a way to see anime screenings and buy merchandise that was largely unavailable in America (or anywhere outside of east Asia). As time went on, these small conventions began to attract more and more people and become cultural centers for fans of Japanese pop culture (recently, conventions have also been including aspects of South Korean pop culture as well).

Nowadays, you’ll see all types of events happening within anime conventions. There will be fan panels and workshops, anime screenings, manga reading rooms, cosplay contests, gaming rooms, as well as merchant rooms and artist rooms for people to buy and sell merchandise and fan art.

Most anime conventions are meant to be family-friendly and will include some programming intended for young children. At the same time, there are also 18+ events and panels that require identification to make sure no kids accidentally see inappropriate content.

Why do people go to anime conventions?

People go to anime conventions for many reasons (including cosplay, merchandise, autographs, gaming, and more), but most people will probably agree that it’s for the feeling of community and being surrounded by people who share your passion for Japanese pop culture.

To some extent, it’s a short window of time where you can escape your boring everyday reality, and spend time with the hobbies that you love. Anime conventions also tend to be fairly friendly atmospheres where you can easily meet new people. It’s pretty common to find a friend group or two that you look forward to catching up and hanging out with year after year.

How long do anime conventions last?

Most notable anime conventions are weekend events. They typically start on Friday and continue through Sunday afternoon. Many larger conventions have also started including some programming on Thursday night since many attendees already arrive at the hotels the night before the conventions start.

However, most of these conventions will also offer single-day badges. If you don’t have the full weekend available, you can still enjoy the convention for one day (usually Saturday is the best if you’re only going for one day).

Conventions that take place in hotels are usually 24-hour conventions. This means they’ll have some programming all the way through the night (usually after 3 am it’s just anime screenings). Conventions held in convention centers usually have limited hours of operation, but even they will remain open until 1-3 am.

There are also other local events that are only put on for one day. These may be small anime conventions or gatherings put on by a local high school or college anime club, or anime conventions that are just getting started (rather than those that have been annual events for 10+ years).

What’s the difference between an anime convention and a Comic Con?

In addition, the focus of these two types of events is subtly different.

How many anime conventions are there?

Currently, there are more than 60 active conventions across the US that have annual events for anime or Japanese pop culture. There have been some in the past that are either on hiatus or no longer hold annual conventions. There are also countless small and local conventions that go unaccounted for or only occur once.

Globally, there are more than 100 active anime conventions held annually that are large enough to take note of. No doubt there are many smaller events as well that aren’t being counted.

What can you do at an anime convention?

There is a lot to do at most anime conventions. Whatever aspect of Japanese animation or pop culture you’re interested in, there will be something for you to do.

At most conventions, you can expect about one-quarter to one-half of the attendees to come dressed in cosplay. Many of these cosplayers make arrangements with photographers to meet up and have photoshoots during the conventions. Amateur and pro photographers will also spend time going around the conventions capturing photos of all the random hall cosplays.

There are also always group photoshoots that get scheduled during conventions. Typically cosplayers from the same series or game will get together to have a large photoshoot session. Most of the time, these are unofficial gatherings. The time and location are passed around by word of mouth. However, at some larger conventions, the group photoshoots are scheduled in advance and will appear in the program material you get upon registration.

There will always be some form of panels or workshops available to attend at anime conventions. Typically, these are run by fans and attendees, not convention organizers. They can be anything from cosplay tips, deep dives into a specific anime series, funny anime clips, advice for writing comics, or anything else related to anime, gaming, or Japanese pop culture.

Larger conventions will often invite guest voice actors to come and participate in panels and autograph sessions. Usually, these will be the American voice actors for dubbed anime and video games, but on rare occasions, you’ll also see Japanese guests being announced as well.

Admittedly, I’m not someone who typically attends the concerts that happen at anime conventions, but you frequently see announcements for J-pop or K-pop bands that will be performing during the event.

The dealer’s room and artist alley are the places you go to buy official merch and fan-made prints and accessories. You can get anything from wigs, contacts, clothing, DVDs, manga, models, dice, and so much more. It’s a geek paradise of merchandise. Just try not to spend all your money in one place. I always limit myself to cash only when walking through these rooms so that I avoid spending too much.

Anime conventions will have screenings of anime at all hours of the day. Usually, there will be at least a handful of different anime showing at once in different rooms around the convention. Some are old nostalgic anime, and some will be showing newly aired anime. Sometimes you’ll even get sneak-peak screenings for movies or episodes that have not aired yet.

Since most anime conventions are also all about Japanese pop culture, they also have panels and events to learn about and celebrate Japanese culture. For example, there have been martial arts demonstrations, workshops about flower arrangements, and panels all about the many Japanese monsters and youkai that you see in anime.

The gaming industry is another aspect of animation that is celebrated at anime conventions. They will usually have a room full of different consoles and games that people can play all day long. There will also be spots for tabletop gaming available for those who prefer card games and board games.

Most anime conventions will have some sort of late-night rave or dance party on Friday and Saturday nights. They usually start at 9 or 10 pm and go until 1 or 2 in the morning. These dance parties are meant to be safe for all ages to attend, but I recommend making sure underage attendees have an adult with them. Some con-goers will get drunk at this point during the convention, which can sometimes lead to inappropriate behavior if there are minors present.

link to What to Wear to an Anime Convention?

If you’ve never been to an anime convention before, I’m sure you’re excitedly wondering what to wear while you get ready for the event. Does everybody cosplay, or is it okay to go in normal...

Sometimes making friends is difficult. Getting up the courage to talk to a stranger is something out of a nightmare for many of us shy and awkward people. But the beauty of anime conventions is that...